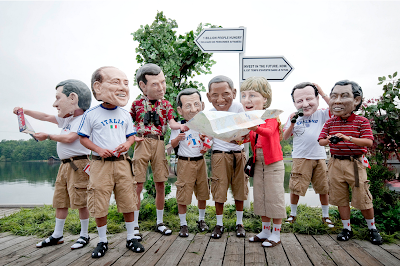 "Lost in Huntsville" is the caption for the above photo (still loving the big heads). It's a useful metaphor for yesterday's G8 goings on.

In particular, what to say about the results of Harper's maternal health initiative? That was a big part of yesterday's G8 news. He's getting some begrudging credit from many sources, for having raised the issue and for having achieved some results. The G8 put up $5 billion in the end, with Canada putting up $1.1 of that total. On top of the $5 billion, there's Gates Foundation money, UN foundation money and funds from other non-G8 nations that take the total up to about $7.3 billion.

The tenor of the coverage shows that the amount, particularly that raised within the G8, is nevertheless viewed as falling short: "G8 health pledges fall short of what's needed," and "Maternal health plan is something of a start," "G8 commitment to poor mothers and children not nearly enough, critics say," "PM musters $5B for maternal health plan."

Why Harper's effort has fallen short is debatable. Not enough leadership on the issue and too much distracting politicking on the bank tax? Harper's uncooperative position on the world stage in terms of climate change action coming home to roost? Changing world economic fortunes? If Harper and Obama really do have such a great working relationship, as we're being reminded this weekend, why then did the U.S. only give $1.3 billion over two years ("...subject to Congressional approval")? Barely more than we did and considering the size of their economy, that's surprising.

Other notes on the issue...there are concerns that Canada's contribution will lead to cuts in other foreign aid commitments in order to pay for the above amount. So the robbing Peter to pay Paul aspect of it may be self-defeating in terms of our contribution.

Further, in keeping with Harper government democratic protocol these days, regarding who gave what in the dollar contributions: "No overall breakdown was available," "Canadian officials refused to provide details of each country's contribution, but sources provided a rough breakdown...". Media have derived various contributions, but still, that the breakdown can't be officially released is typically bizarre.

Tough to be too critical with this issue given the subject matter. But on the bright side, at least Harper's managed to achieve some consensus thus far this weekend. The falling short thing.
Posted by Nancy Leblanc at 6/26/2010 07:12:00 AM