Well, it's almost over for this little defamation suit that Pierre Karl Peladeau has brought against Radio-Canada executive Sylvain Lafrance for the "voyou" (thug") comment. Closing arguments are today. A dramatic moment occurred in the courtroom on Monday, however, captured quite well by this journalist, David Santerre at Rue Frontenace: "Des unes de magazines qui laissent le juge perplexe."

The judge, in a reluctant manner, held up two magazines for the courtroom to see, both of which would have been on the newsstands during this trial. This one, from L'Actualite suggesting that Peladeau is the "most dreaded man in Quebec."

And this one from La Semaine with coverage of the trial and showing Peladeau and his wife being photographed in the halls of the court house: 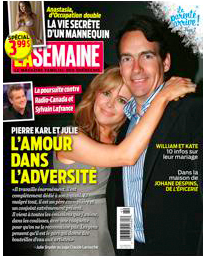 The clear implication from the judge, in raising these magazine covers, was that perhaps Mr. Peladeau had something to do with these publications coming along during the trial, to perhaps sway the court. You get that sense because the judge prefaced his raising of these magazine covers with this remark:

It sounded like he was saying ah, this is why so many of my colleagues didn't want to hear this case, as he saw the media coverage during the trial. Peladeau's lawyer denied that there were any strings pulled for such coincidental media coverage, even the lawyer for Radio-Canada joined in to dismiss the notion, maybe sensing that the trial was about to go off the rails or provide a ground of appeal for Peladeau if he loses his claim. The report notes that the judge remained skeptical at the end of the discussion.

What's interesting is that the judge went ahead and raised this as an issue. Was he referring to an actual trial selection process in which he was exposed to reluctance by other judges to sit on a Peladeau case? That would be something. Or was it a more casual impression this particular judge had from his colleagues? Either way, pretty fascinating and bold for him to say this. He wasn't afraid to raise the possibility of some kind of media influence being brought to bear on the court room. Whatever one might think about whether this was a useful thing for the judge to do near the end of the trial or not, it certainly sent a public message.