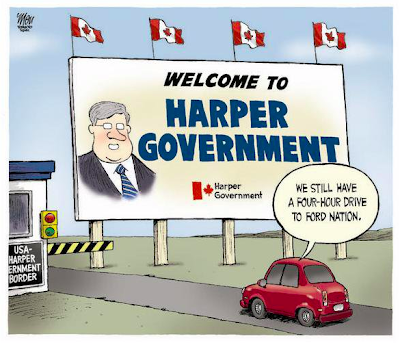 There was more reporting earlier tonight on the "Harper Government" phenomenon that underscores how that usage is particular to this government despite the typical bleating that everybody does it.


Days of digging by Conservative researchers have turned up just three examples of the former Liberal government calling itself by the name of the sitting prime minister in the same fashion as the current "Harper Government" branding exercise.

That contrasts with literally hundreds of "Harper Government" headlines splashed across Government of Canada web sites over the past four months.

All communications pass through the PCO before being released and sources say the changes to the releases are being made there before being sent back to departments and even arms-length government agencies. Some departments have refused to accept the alterations, and at least one agency scrubbed the "Harper Government" moniker after senior management discovered it on the agency website.

Clearly, these people are in a league of their own. Big score on Reddit today, by the way.

Update: Also from that report above, note this: "Civil servants in at least six departments now say the naming policy comes from "the Centre" — meaning the Prime Minister's Office and the Privy Council Office." That's up from four departments in previous reporting.
Posted by Nancy Leblanc at 3/10/2011 12:17:00 AM