What happens when august institutions are disrespected 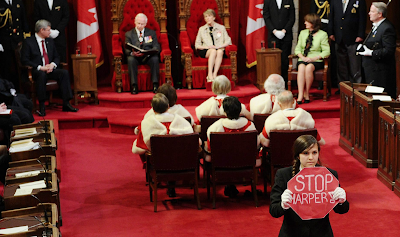 It breeds disrespect. That reference in the blog post title is to Mr. Harper's government and the actions it has taken which have bred that disrespect for one of the most esteemed institutions in Canada. The seat of our government has seen tremendous disrespect under his leadership. Not caring that one of your ministers inserts a "not" after a document had been signed by others, for example. Not respecting members of parliament who ask the government for the most basic of financial information supporting billions in purchases the government seeks to make. Making light of an historic contempt verdict. To cite the more egregious examples of recent memory and not even needing to go near the famous incidents of prorogation.

Some say the Throne Speech's reading in the Senate was not the place, tut tut. The easy groupthink response rears its head right from the get go. It allows you to give a nod to the sentiment of protest but just say, well, maybe it should have been somewhere else. Essentially agreeing with the protest then, which is the most important aspect. But if it had been somewhere else, it wouldn't have achieved a fraction of the impact.

Today's incident may be a harbinger of things to come under the Harper majority. Creative protest in forms unseen to date. That page felt strongly about what is happening now in Canada. There are many, many more just like her and she certainly sent her message today.
Posted by Nancy Leblanc at 6/03/2011 04:46:00 PM