Parkdale Tenants facing down a Landlord

Last Wednesday I attended an organizing meeting in the basement of the Parkdale Library for tenants of the Akelius owned buildings in the heart of Parkdale.

Akelius is a Swedish owned company that entered the Toronto real estate market in approximately 2011 and now owns over 2,000 units in over 30 properties across the city, including four buildings in Parkdale that have garnered much media attention and legal action thanks to tenant organizing.

There is a hearing this morning at the Landlord-Tenant board at 79 St. Clair Avenue East at 9 am and there will be a demonstration outside the board - part of what last week's organizing meeting was about. One of the Parkdale buildings is the subject of a hearing today on the issue of back to back yearly above guideline rental increases. Additionally, there is a group building challenge to the landlord's legal ability to remove superintendents from the site of these buildings.

When I ran during the provincial election of 2014, the difficulties tenants are having in Parkdale with this one landlord in particular, the foreign-owned Akelius, came up repeatedly. So, during the summer and into the fall of 2014, I continued to pay attention to these issues and began to try to help based on the concerns I had heard.

In the fall, I consulted with Parkdale Community Legal Services, who have been assisting the tenants, helping them to organize and providing legal assistance. One of Parkdale Legal's case workers spoke at the meeting last week about the importance of the tenants' organizing - rightfully so - it is the most effective way in which pressure can be immediately brought to bear upon a landlord that fails to live up to its obligations.

There was a substantial turnout to the meeting, primarily tenants of Tibetan heritage, and the meeting was translated simultaneously. The tenants who told their stories are viscerally motivated by this landlord who fails to repair their units - they speak of holes in bathrooom walls, broken sinks, etc. - yet nevertheless seeks above-guideline rent increases for structural repairs to their building, beyond their units. One of the principal problems is clearly the lack of a stick to enforce Landlord repair obligations and this foreign-owned Landlord in particular, who seeks to expand its holdings in Toronto, is becoming notorious for its failures that are viewed as an effort to drive tenants out and allow higher rents to be charged to incoming tenants. Affordable housing, raised yesterday by our Mayor, is put at risk. 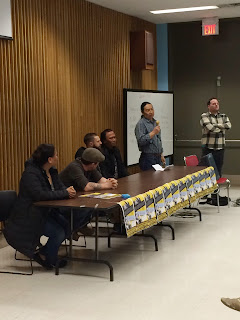 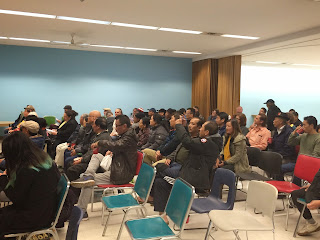 Thanks to the organizers and the tenants for allowing me to express support for their organizing efforts and to provide an update on how I've tried to help, as a citizen, by raising these concerns with the provincial government and further, by participating in the current provincial consultation on Long Term Affordable Housing strategy. In addition to the tenants' organizing track, such efforts to seek changes to the rules that are affecting their tenancies were welcomed by the crowd in the room.

Watch for the outcome of today's hearings and developments in this ongoing story coming out of Parkdale as a result of these determined residents.

Update:  A summary of the results and status of the two hearings at the Landlord & Tenant board can be found here. Kudos to the tenats of 188 Jameson for their organizing and the outcome of their above guideline increase hearing: "At the end of the day Akelius conceded to a 4.5% increase over three years (1.2% in 2014, 1.6% in 2015, and 1.7% 2016). Akelius also gave in to the demand not to bring applications for above guideline increases in the next two years and agreed to allow tenants up to six months to pay any back any rent they owe due to the increase."
Posted by Nancy Leblanc at 4/28/2015 07:00:00 AM

Earlier today, Paul Godfrey, the President and CEO of Postmedia Network Inc., attended at the Ontario legislature where he stood next to Patrick Brown, candidate for the leadership of the Progressive Conservative Party of Ontario, to announce his endorsement of Brown. This is a moment that warrants some critical observations on the appropriateness of a major media CEO making such a public statement of support of a political candidate.

Here was the scene on the north lawn of Queen's Park where, facing the legislature, the endorsement was rolled out:


Godfrey is President and CEO of one of Canada's largest media operations. Indeed, this announcement occurs on the heels of the federal Competition Bureau having given the green light to Postmedia Network's acquisition of 175 Sun Media newspapers. There is a public democratic interest that the Competition Bureau took into consideration when granting public approval over this expansion and the recency of that decision and his company's expanded media footprint in Canada might give some executives cause for extra caution and care when considering such a political endorsement.

Further, Godfrey's endorsement of Brown cannot help but be viewed without considering Godfrey's recent history with the Wynne government. Recall that in the spring of 2013, he was removed from his position as Chair of the Ontario Lottery and Gaming Corporation. That history informs his announcement today and bolsters a perception of an adversarial political context.

A President and CEO of a company is the chief spokesperson for that entity. A President and CEO doesn't simply "run the business part of the newspapers," as Mr. Godfrey stated today, but speaks on behalf of the organization. Herein lies the perceived conflict of interest in a media CEO endorsing a political candidate, and the importance of journalistic objectivity. A CEO speaks on behalf of, represents and embodies that corporation's public and private dealings with its many stakeholders. It is quite difficult to unpack the chief executive's persona from that of the corporate entity due to their position and the scope of their authority. This is why, as Postmedia Network's Business Code of Conduct, provides - "Postmedia Personnel may participate in the political process as private citizens." - there is a signalling implicit in Mr. Godfrey's endorsement to his company's journalists, customers and shareholders. In short, Mr. Godfrey is not speaking as a private citizen. CEOs rarely do.
Posted by Nancy Leblanc at 4/02/2015 04:48:00 PM